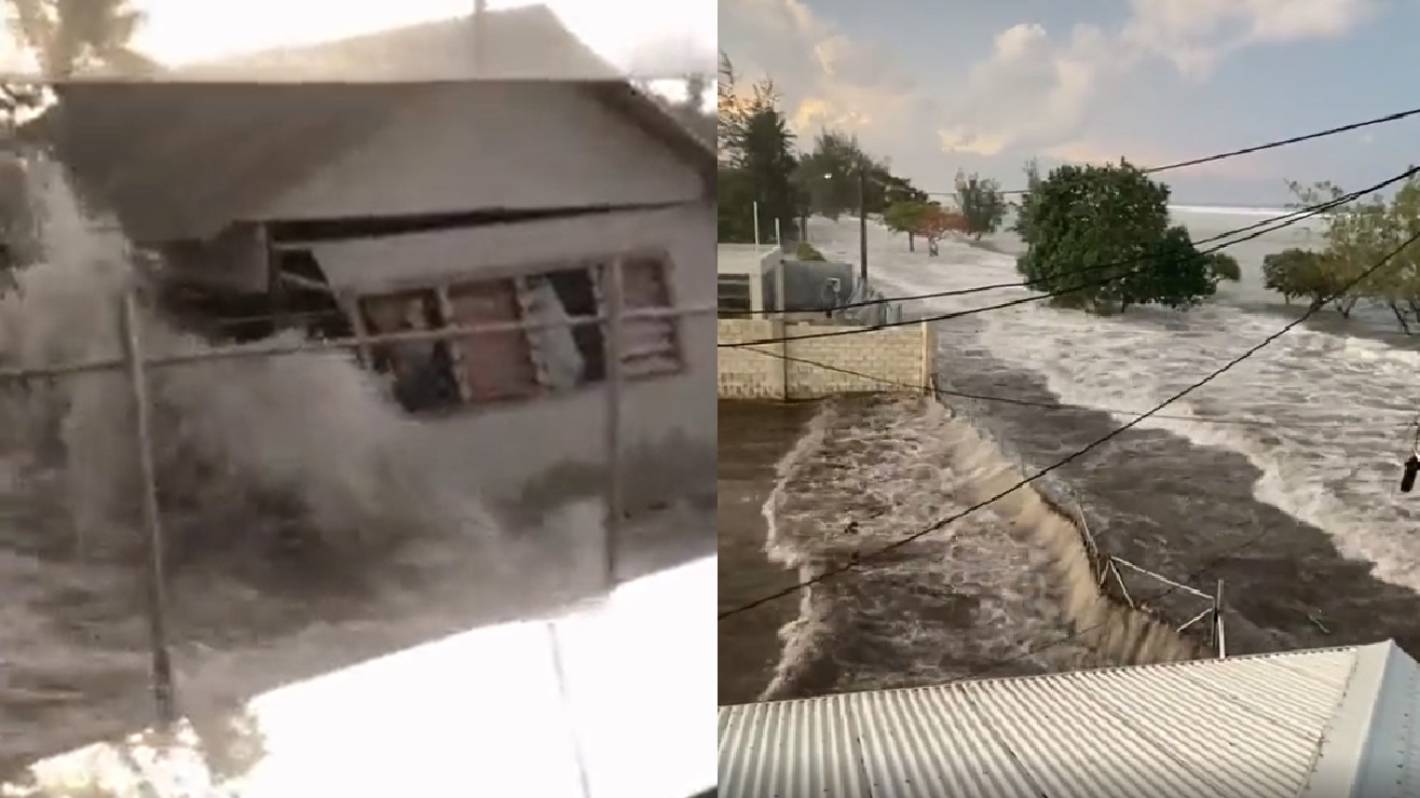 A tsunami has hit Tonga, after a massive eruption from an underwater volcano near the Pacific Island nation on Saturday.

The Pacific Tsunami Warning Center in Hawaii, US, confirmed the eruption generated a tsunami late on Saturday night. It followed an earlier eruption, on Friday, that sent ash, steam and gas 20 kilometres into the air.

Stories of horror and despair quickly emerged in the aftermath of the tsunami. Locals described waves hitting their homes as they ate dinner, and one man had to carry his grandmother as they fled to the roof of their house.

READ MORE:
* Volcanic eruption near Tonga felt like ‘bombs were exploding’, panic on the ground as tsunami waves hit
* ‘Screams everywhere’: Tsunami waves crash through homes in Tonga after eruption
* Whakaari/White Island trial not expected to start until 2023

Mere Taufa was inside her house with her family, getting ready for dinner, when they heard and felt the eruption.

“It was massive, the ground shook, our house was shaking. It came in waves, my younger brother thought bombs were exploding nearby,” Taufa said.

“My first instinct was to take cover under the table, I grabbed my little sister, and screamed at my parents and others in the house to do the same.”

She said next thing they knew, water had filled their home.

“We just knew straight away it was a tsunami. Just water gushing into our home.”

She saw the walls of one of her neighbours’ homes collapsed, from her own window.

“You could just hear screams everywhere, people screaming for safety, for everyone to get to higher ground.”

Tevita Sailosi carried his elderly grandmother to the roof of their Nuku’alofa home after the tsunami hit.

The skies over Tonga went dark as ash fell in the wake of a volcanic eruption.

“We’re still in shock to be honest, first we heard the explosion, and then water was in our house,” Sailosi said on Saturday night.

His family was safe, but worried about what the night would bring.

“Hopefully we’re out of this now, and there aren’t any more waves. Right now we’re just staying put, we’ve got our phones and radio on, for any updates.

“We’ve heard screaming, people have helped where they could. We’ve also heard some singing too, so that’s lifted our spirits a bit. We just hope everyone else is safe out there.”

A local who did not want to be named told Stuff the New Zealand High Commission complex was “filled with people, and they’re running out of food to feed them”.

“One boy who just arrived soaking wet said he ran out of his friends’ home not knowing what happened to his family. He’s not sure if they made it out of their home as they don’t have a car to leave in.”

The volcano is located about 30 kilometres south-east of Fonuafo’ou island in Tonga.

It was erupting intermittently in late December.

A national advisory was issued by New Zealand’s National Emergency Management Agency shortly after 8.15pm on Saturday, warning it expected coastal areas on the north and east coast of the North Island to experience “strong and unusual currents” and “unpredictable surges at the shore”.

NEMA said there was a danger to swimmers, surfers, people fishing, small boats and anyone in or near the water close to shore.

People in or near the sea should move out of the water, off beaches and shore areas and away from harbours, rivers and estuaries until at least 4am on Sunday, and people were warned not to go to the coast to watch “unusual” wave activity.

Coastal inundation (flooding of areas near the shore) was not expected, and there was no need to evacuate other areas unless directly advised by local civil defence authorities, the advisory stated.

The currents and surges would continue for several hours and the threat “must be regarded as real” until the advisory was cancelled, NEMA said.

The NZDF said it was monitoring the situation on Saturday night, and was ready to assist if the Tongan Government requested help.

Jese Tuisinu, a reporter at Fiji One, posted a video on Twitter showing it was “dark” in parts of the island, and said people were “rushing to safety” following the eruption.

United States-based former safety and protection cluster co-ordinator for the Ministry of Internal Affairs Lavinia Taumoepeau-Latu was on the phone with her husband at the time, but lost the connection.

While they were speaking, it went dark and began raining small stones.

Her husband told her there were people trying to evacuate to higher ground, but as there was only one main road from the town messages on the radio were telling people from central and eastern areas to stay put to allow others to evacuate.

Eruption felt in other countries

People from as far away as neighbouring Fiji – northwest of Tonga – reported hearing or feeling the eruption on social media on Saturday night.

Dr Frank Ross, who lives in Suva, Fiji – over 800km away from Tonga – said there had been “constant, on-and-off booms” for over half an hour that were still ongoing at 7pm NZ time.

“The house has been shaking, I’ve figured out that it must have been from this eruption.

“I went outside, and it sounded like this constant boom, boom, boom in the distance, but there wasn’t any thunder … it must have been massive,” he said.

“It was even shaking a few minutes ago – it comes and goes, so it must be a series of eruptions. It’s been going on for half an hour or 45 minutes,” he said on Saturday night.

Ross said there were no signs of any disruption to the sea near his home, which he said was about 100m from the sea.

The United States issued a tsunami advisory for American Samoa following the eruption, but cancelled it later on Saturday night.

The Fijian Government also advised those living in low-lying coastal areas to move to higher ground in anticipation of strong currents and dangerous waves. Fiji opened evacuation centres on Saturday night due to the “unusual tidal waves”.

The Ministry of Foreign Affairs and Trade (MFAT) said there were 18 New Zealanders registered on SafeTravel as being in Tonga.

MFAT had “no information” on Saturday night on whether any New Zealanders had been affected.

All New Zealanders in Tonga are advised to register their details on www.safetravel.govt.nz.

Meanwhile, Metservice reported a “pressure surge” from the latest eruption had been observed in weather stations across New Zealand.

Tauranga couple Kris and Tim, who didn’t want their last name used, believed they felt the eruption while sitting in their living room.

Waves struck the Pacific Island kingdom after the Hunga-Tonga-Hunga-Ha’apai erupted.

“We were watching TV and the wind is blowing, birds are tweeting, so over top of all that we heard a very loud rumble, like a boom, and we both looked at each other and said ‘what the heck was that?’.

“It was very intense, it was a low rumble very far away,” they told Stuff.

“It was like Jurassic Park. As if the T. rex was coming in the distance and the water on the dash is vibrating. That’s what it was like.”