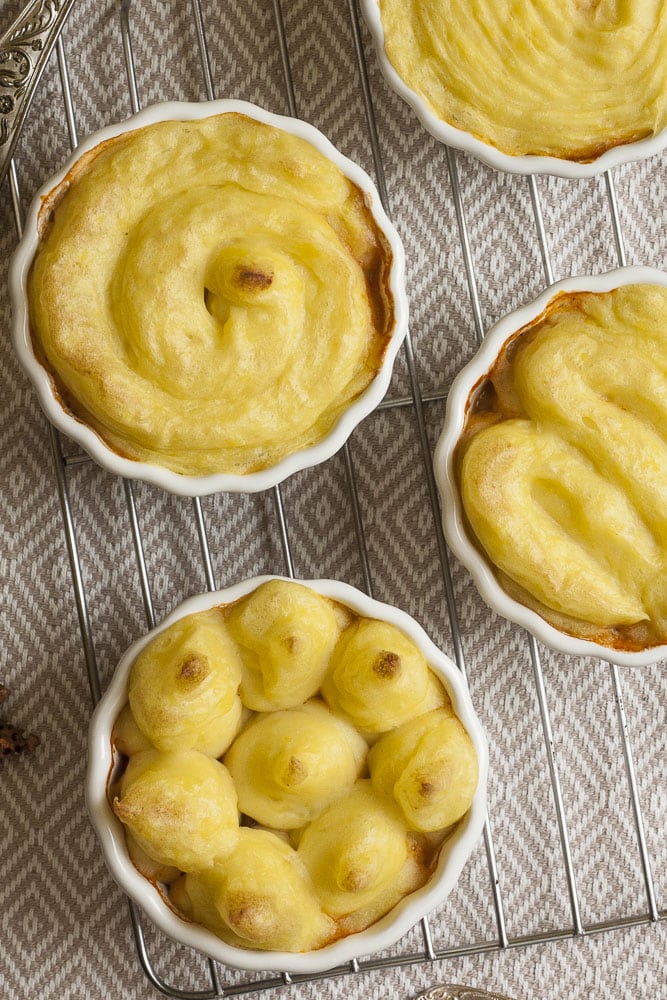 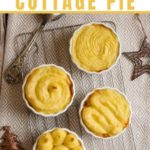 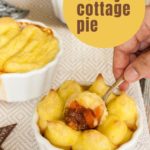 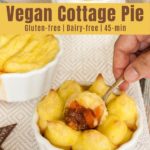 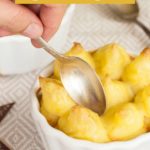 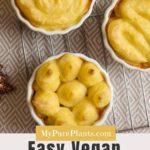 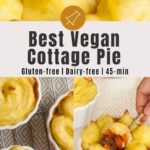 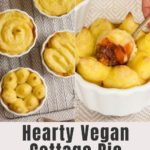 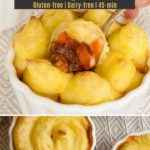 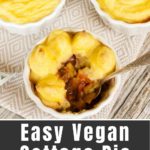 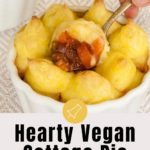 This Vegan Shepherd’s Pie (or Vegan Cottage Pie) is true comfort food for fall and for winter with rainbow carrots, zucchini (courgette) and eggplant (aubergine) topped with creamy vegan mashed potatoes. If you are looking for a Vegetarian Shepherd’s Pie recipe for Thanksgiving or for Christmas with a light veggie stew filling (no lentils, no grains, no soy, and no nuts), this is the one to check out.

It is a classic fall/winter comfort food. When it is grey, wet and cold outside, all you need is a warm, filling and homemade meal such as a steaming bowl of hearty Vegan Jackfruit Beef Stew, or a rich and warm Vegan Bean Chili, or a plateful of veggie-loaded Vegan Pot Pie. But for me, winter also means lots of baking. I love it when my house smells cinnamon while I am making Apple Crisp Pie or Pumpkin Cheesecake with Gingerbread Pie Crust.

What is Shepherd’s Pie?

We first ate Shepherd’s Pie when we were living in the UK. It was ages ago, but definitely way before we discovered the benefits of plant-based eating. I don’t think that we tried the traditional one, as we have never been very keen on the lamb. So, I believe it was rather a Cottage Pie with minced beef, which we ate back then. This dish became quite popular in our kitchen for several reasons:

Ingredients for the veggie stew

In this recipe, we opted for a light veggie-packed filling without any legumes, grains, soy or nuts. So the ingredients are the following:

What else can you add?

I would happily add mushroom, or any of the root vegetables (parsnip, rutabaga, celeriac). You can certainly add legumes like peas, kidney beans, lentils or sweet corn to make the stew loaded with extra protein.

I wouldn’t add potatoes or sweet potatoes as you will have them as a topping. I also would stay away from broccoli or cauliflower or leafy greens. They just don’t scream shepherd’s pie to me.

As the classic Shepherd’s Pie relies heavily on ground beef, you can also find great vegan substitutes you can use.

How to make Vegan Shepherd’s Pie?

We made this recipe several times both in a stockpot and in the Dutch oven. Both of them makes delicious veggie stew.

The Dutch oven is made of thick cast iron so it distributes and keeps the heat more evenly. And due to its enamel coating, it is more unlikely that anything is sticking to the bottom or burning down. While the stockpot is usually made of stainless steel or aluminium thus it is thinner. Therefore, you need to watch the heat more carefully.

How to make vegan mashed potatoes?

If you would like to turn your vegan mashed potatoes up a notch, make our Vegan Mashed Potatoes with Celery Root instead. Your guests will never guess why your mashed potatoes have more flavor than their usual version.

Top tips to make it perfect every time

How to layer a Vegan Shepherd’s Pie?

To layer your Veggie Shepherd’s Pie, first, take 4 mini ramekins or alternatively a large oven-safe glass baking dish*or casserole dish if you want to make it in one batch. We prefer to use a glass pot as in this way we get to see exactly how the stew is doing in the oven.

Take your ramekins or large oven-safe dish and fill them with the boiling veggie stew leaving 1 inch (1-2 cm) empty. Make sure to add from the liquid sauce not only the veggies. Cover them with vegan mashed potatoes and bake them in a pre-heated oven or broiler of 400 Fahrenheit (200 degrees Celsius) for 15 minutes.

As everything is already cooked and ready to eat. You don’t need much time to bake this Meatless Shepherd’s Pie in the oven. It just needs to get a nice light brown color on top and the stew should be a little bit of bubbling up around the sides.

What to serve with it?

The best to serve this Vegan Shepherd’s Pie is right out of the oven. But don’t be mistaken here, it also makes glorious leftovers for lunch tomorrow. Your future self will thank you for it.

As Shepherds Pie is topped with mashed potatoes, we can call it a one-pot meal. You might not even need any other side dish than mashed potatoes and that is totally fine. However, along with the principle of eating the rainbow, let us introduce you to some other side dishes that would pair well with this Vegan Shepherd’s Pie. Wouldn’t they be lovely on your Thanksgiving or Christmas dinner table next to it?

If we make Vegan Shepherd’s Pie during a weeknight, we pair it with one of 30 Deliciously Creamy Vegan Soups for example:

No, the traditional Shepherd’s Pie recipe has ground beef and the mashed potatoes on top is likely made of dairy products.

What kind of potatoes to use?

Yukon and Russet potatoes are the ones that are used the most.

What is in a vegan cottage pie?

To make a cottage pie vegan, you need to leave out the ground beef or substitute it with a vegan alternative, like TVP (textured vegetable protein), lentils or other legumes, crumbles tofu, or walnut-mushroom-cauliflower mince.

Can I reheat a vegan Shepherd’s Pie?

Yes. It is a perfect recipe for batch cooking. It keeps well in the fridge and also perfect after you reheat it.

How do you store vegan Shepherd’s Pie?

Cover it with a wrap and keep it in the fridge for 3-4 days. I don’t like to freeze mashed potatoes though as after they thaw the consistency and the texture alters a bit to my taste.

This Vegan Shepherd’s Pie recipe is meat-free, dairy-free and egg-free. It is also suitable for vegan, vegetarian, nut-free and gluten-free diets. It can also be WFPB-friendly (whole foods plant-based) if you cook the onion and the garlic in water or in veggie broth. 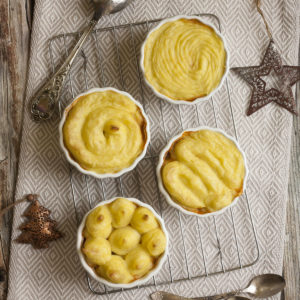 Prevent your screen from going dark

UPDATED: This recipe was originally posted in October 2018, but was rewritten and republished with detailed instructions, and tips in October 2021.