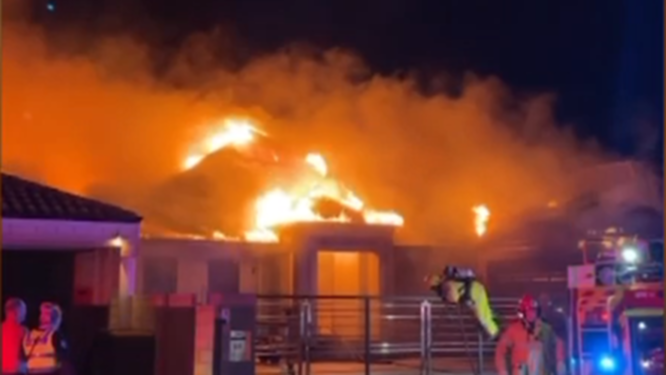 Emergency services have issued a stark safety reminder for homeowners after a household item is believed to have ignited a devastating blaze that left two West Australian grandparents homeless.

The fire gutted a million-dollar home along the canals in Halls Head, near Mandurah on Sunday night, causing the roof of the home to cave in.

The owners said were woken by a burglar alarm that they say saved them just in time before the home went up in flames.

“We wouldn’t be here now because the roof absolutely fell in, in no time at all,” Kathy Nice said.

It took seven fire trucks about 45 minutes to get the blaze under control.

Firefighters were unable to stop the fire consuming the home, only prevent it from spreading, as the homeowners were helpless watching their possessions burn.

Mrs Nice said it was unbelievable to see their home destroyed.

“You just can’t believe it is happening … it’s a six-year-old house,” she said.

Neighbours too watched on in horror and feared the worst from across the canals.

The grandparents have been left homeless, counting the cost of what’s lost that will number in the millions.

But Department of Fire and Emergency Services fire investigation and analysis unit district officer Peter Jones says the couple is “very fortunate” to be alive.

“The two occupants were lucky to escape with their lives,” he said.

Authorities are still investigating the cause of the blaze, but they believe it is likely it ignited from a faulty lithium ion battery on charge overnight.

“We recommend that people charge the batteries away from anything flammable,” Mr Jones said.

“When they’re charged take them off and if there’s a faulty one don’t continue to charge it.”