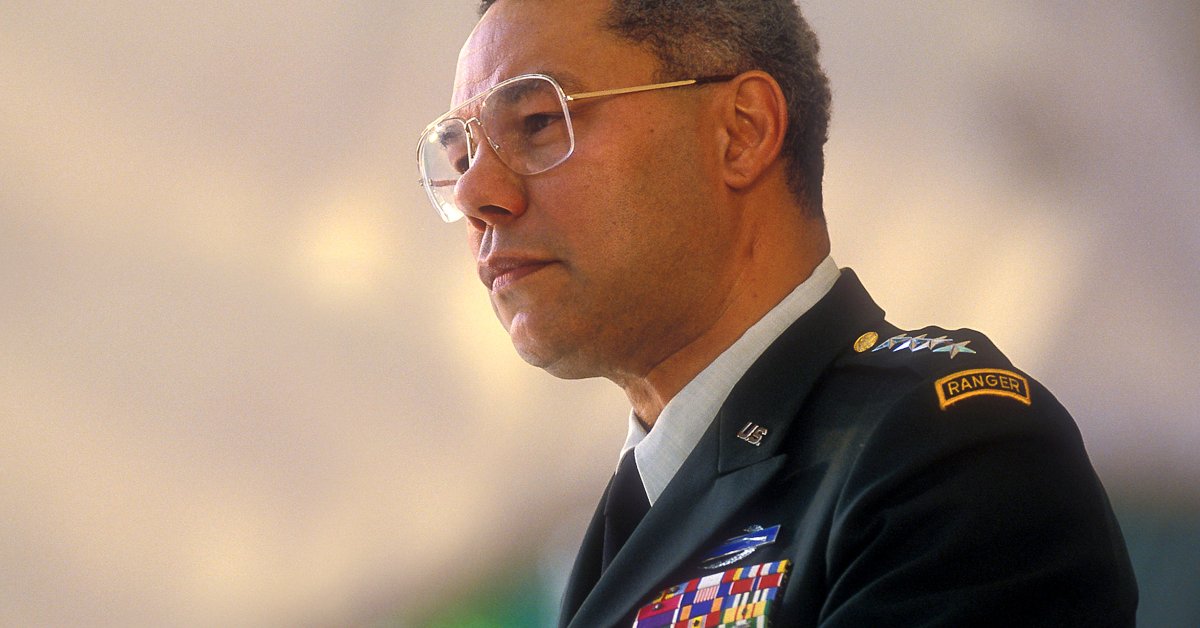 In many ways, we came from completely different worlds. Colin Powell was born in Harlem, raised in the South Bronx and, as a young R.O.T.C. cadet in the late 1950s, endured the injustice of the segregated South. I was born in San Francisco and grew up in the 1970s amid the summer of love, marches for women’s rights, and where neighbors proudly flew rainbow flags.

He rose through the ranks of the military and Washington with a deep respect for institutions, hierarchy and tradition. I first made my mark building adventure games for the Atari 800 and later by starting my own software company in an industry that celebrates innovation and breaking old models with new, transformative technologies.
[time-brightcove not-tgx=”true”]

But when our paths unexpectedly crossed in 1997, Colin Powell helped change the way I see business and the role of companies in the world.

I was in Philadelphia for the President’s Summit for America’s Future, chaired by Powell and his nonprofit, America’s Promise, dedicated to lifting up at-risk youth. Five living presidents and the top 100 CEOs in the world were in attendance. I was a thirty-two year-old Silicon Valley techie looking for inspiration, and I’ve never forgotten what the former general said when he took the stage:

Colin Powell told us that day that business could do more than simply make money. We had to be a force for good and a platform for change. It was the best advice I’d ever heard, and in the years that followed, he became one of the most important mentors in my life.

I went back to work at my job at Oracle, a fast-growing software company, ready to change the world. Inspired by General Powell’s words, I came up with the idea for Oracle’s Promise, which would provide computers to schools all over the world.

For our first project, we went into MacFarland Middle School in Washington D.C. — a school General Powell had adopted — to install computers.

Unfortunately, it was 100 degrees and the busiest time of the year at Oracle and not enough people showed up to get the job done. So I called General Powell to let him know the situation. I said, “I’m sorry, I’m not going to be able to get the computers in. We have it all there, ready to go.” He hung up the phone on me. I knew we’d let him down. About 30 minutes later, a battalion of marines arrived and all of the computers were quickly installed. That day, he taught me not only what leadership and integrity meant—but also that it’s good to be a general.

Shortly after, I founded Salesforce in 1999—inspired by General Powell to include a new model of philanthropy as a fundamental part of our company—pledging one percent of our equity, product and time to our communities. In 2014, I invited General Powell to join our board of directors. I wanted our company to benefit from his wisdom, operational expertise and the core values that guided his extraordinary life.

He served on our board for seven years. With his military discipline, he never missed a call. I came to appreciate the qualities that presidents of both parties clearly valued in him—his integrity, his honesty, his pragmatism and his focus on problem-solving. He called me Marc, but I always called him “Sir.” When he offered his advice—whether on the importance of transparency or communicating clearly so people know where you stand—I realized that he was still mentoring me.

He often told me, “You recruit a soldier, but you retain a family.” I’ve tried to follow his example, building a culture that brings our families and communities along with us. General Powell was incredibly passionate about helping veterans, especially the enlisted troops, and inspired the creation of Salesforce Military, a job training and career program for service members, veterans, and military spouses. Through his vision, we’ve reached 40,000 veterans, placed 1,200 in jobs, and built a network of 500 employers that help support their career success. He became part of our Salesforce family, we became close friends, and I relied on him tremendously.

Colin Powell knew that, at this moment in history when there is so much public mistrust in institutions, leaders need to make trust one of their highest values. He was the first to admit that he wasn’t perfect. He acknowledged mistakes, held himself accountable and demanded the same of others. He spoke out courageously when he felt our nation or its leaders were falling short of our ideals. When I screwed up, he let me know it, too.

He knew that to build trust, companies need a purpose beyond profit. In one of his now-famous 13 leadership lessons, he explained that “great leaders inspire every follower at every level to internalize their purpose, and to understand that their purpose goes far beyond the mere details of their job.” Our world would be a more equal, just and sustainable place if more CEOs recognized that they have obligations not only to their shareholders, but to all their stakeholders, including employees, communities and the planet.

Specifically, Colin Powell knew that business could not sit on the sidelines in the march for equality. As a board member, he often joined our all-hands conference calls with many of our 75,000 employees. On one call, after the brutal murder of George Floyd, he recalled being a young soldier fighting in Vietnam while his wife Alma, back home in Birmingham, Alabama, guarded their house at night from racist mobs led by police chief Bull Connor. “We’ve come a long way,” he told us, “but we’ve got a very long, long way to go yet.”

Finally, Colin Powell knew that one of the best antidotes to inequality is education and that business has a responsibility to help. As a child of immigrants, he credited his parents and teachers with his meteoric rise. On our calls, he spoke with pride about his work with underserved youth and the City College of New York where he graduated. Thanks to the philanthropy he helped to inspire, Salesforce has so far granted $120 million to public schools. We have “to do everything we can,” he told us, “to keep bringing these kids along.”

Today, many CEOs I talk to struggle with how to have a purpose beyond profit. Many Americans feel we’re hopelessly divided as a country. Yes, these are difficult days. But I share Colin Powell’s perpetual optimism. Because if we need a lodestar for how to live and work and serve others, we could ask for no greater example than the trailblazer from the South Bronx who taught us to embrace our duty to each other—as neighbors, as Americans and as fellow human beings.