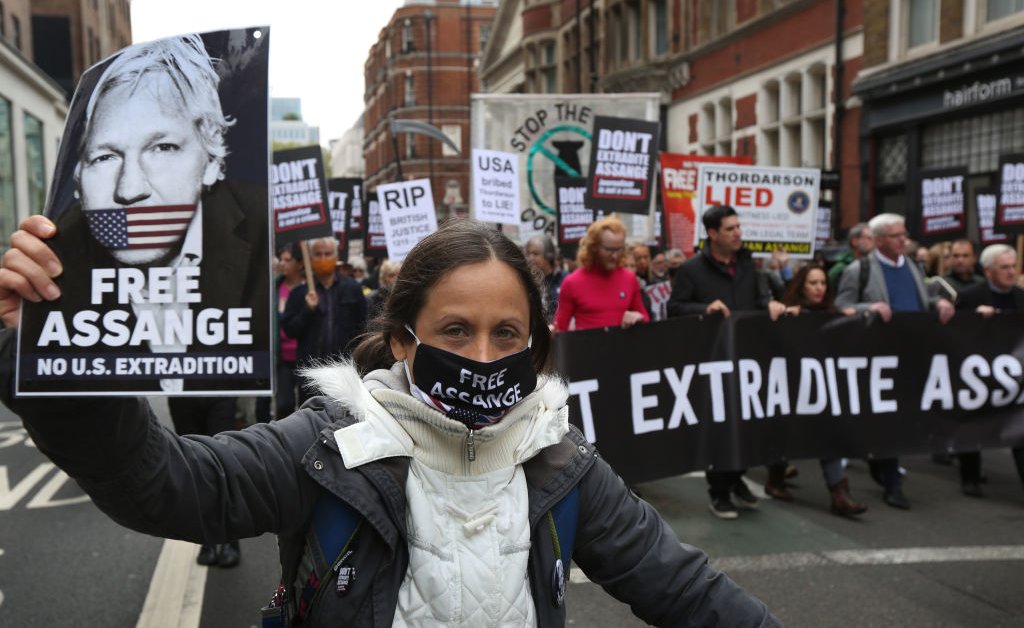 This week lawyers for the U.S. government began a legal challenge to extradite WikiLeaks founder Julian Assange from the U.K. to face charges of violating the Espionage Act.

Assange is wanted in the U.S. on 18 criminal charges after WikiLeaks published thousands of secret U.S. military and diplomatic documents concerning the Afghanistan and Iraq wars in 2010.

In a two-day hearing in the British High Court, the U.S. government appealed a Jan. 4 ruling by a London district judge declining to extradite Assange to the U.S. largely due to the risk he would take his own life in a maximum security prison.
[time-brightcove not-tgx=”true”]

Key recent developments—including new assurances about how Assange would be treated by the U.S.—were brought before a British judge tasked with reviewing the lower court’s ruling and considering whether the risk to Assange’s safety had changed.

Here’s what you need to know about the appeal and the story so far:

Who is Julian Assange and what is his website, WikiLeaks?

Australian cyber activist Assange launched WikiLeaks in 2006. The non-profit was set up with the aim of exposing state secrets its founder argued should be in the public domain. In 2010, U.S. Army intelligence analyst Chelsea Manning provided WikiLeaks with hundreds of thousands of highly classified internal documents.

The publications included revelation of what appeared to be war crimes. Footage released in April 2010 showed U.S. soldiers shooting and killing civilians from a helicopter in Iraq. It also included sensitive information about human intelligence sources and surveillance techniques, disclosure of which the U.S. argues put lives at risk.

Later that year, in November 2010, Swedish authorities issued an arrest warrant for Assange over allegations of rape and other sexual offences. Assange was working in London at the time, and claimed the allegations were fabricated in order to facilitate his extradition from Sweden to the U.S. for publishing the sensitive documents.

Facing extradition to Sweden, Assange skipped bail in June 2012 and sought refuge in the Ecuadorian embassy in London. Two months later, Ecuador granted him asylum on the grounds of political persecution. He resided in the embassy building for seven years, during which time the Swedish investigation was dropped in 2019.

Why does the U.S. want to extradite Assange?

In April 2019, after a series of behavioral transgressions alleged by the Ecuadorian embassy in London, Ecuador revoked his diplomatic asylum. Assange’s supporters claimed the move was motivated by probes by WikiLeaks into corruption by the Ecuadorian President Lenin Moreno. Moreno has denied the corruption accusations. He also said Assange’s asylum was revoked because Assange’s behavior was too disruptive. He claimed Assange “smeared feces” on embassy walls, an allegation the activist’s lawyers called “outrageous”.

Within hours, police in London arrested Assange in the embassy on a U.S. extradition warrant for an indictment of conspiracy to hack a government computer. He was charged by British courts for breach of bail and in May 2019 was sentenced to 50 weeks in a high security London prison. That same month, the U.S. indicted Assange on 17 further charges under the Espionage Act, which carry a total maximum sentence of 170 years in prison. Assange has always denied that his actions constitute espionage.

After visiting Assange in British prison in May 2019, the U.N. special rapporteur on Torture, Nils Melzer, concluded that “in addition to physical ailments, Mr. Assange showed all symptoms typical for prolonged exposure to psychological torture, including extreme stress, chronic anxiety and intense psychological trauma.” The British government disagreed with some of those conclusions.

The extradition process began in May 2019 but was delayed several times partly due to the COVID-19 pandemic. Persuaded by the defense team’s arguments that the extradition of Assange would be oppressive due to his risk of suicide, a British judge ruled against the extradition on Jan. 4 this year. The U.S. announced it would appeal the decision, but Assange was denied bail due to the risk he might abscond.

What did the U.S. argue in the appeal hearing?

On Oct. 27, the appeal hearing began in the British High Court. Assange did not attend due to poor health, his legal team said. He later appeared via a video link from prison.

Lawyers representing the U.S. argued that Assange’s health issues were not as severe as Assange’s legal team had claimed during the initial extradition hearing. James Lewis QC told the court that in the previous proceedings Assange’s psychiatrist had failed to disclose Assange’s relationship with Stella Moris, a lawyer originally on his legal team, and the couple’s two children, who were conceived during Assange’s stay in the embassy.

Having the responsibility of children lowered Assange’s likelihood of suicide, Lewis argued. The U.S. lawyers also pointed to the lower rate of suicides in prisons in the U.S. compared to the U.K., and argued that Assange’s depression was “moderate” rather than “severe”.

Lewis emphasized that the U.S. government had worked to mitigate the risks to Assange if extradited, having issued four binding assurances concerning his proposed treatment in U.S. custody. These included an agreement to send Assange to his home country of Australia to serve the prison sentence and not to incarcerate him in super-maximum security prison ADX Florida. They also included an agreement not to subject him to a highly restrictive form of solitary confinement, provided he did not commit another offence.

What was Assange’s defense?

Assange’s lawyers argued that his risk of suicide remained substantial and defended the psychiatrist’s decision not to disclose Assange had a partner and two children.

Representing Assange, Edward Fitzgerald QC pointed to several revelatory investigations by the press concerning Assange’s time in the Ecuadorian embassy. In 2019, Spanish newspaper El País published evidence that a Spanish security firm tasked with protecting the embassy building had been secretly surveilling Assange, his lawyers, and visitors, and reporting information to the CIA. Security staff allegedly took samples from a baby’s diaper to check whether Assange and Moris were the child’s parents.

Last month Yahoo News published a report that the CIA had plotted to poison, abduct or assassinate Assange in 2017. “Given the revelations of surveillance in the embassy and plots to kill him,” Fitzgerald told the court, “there are great grounds for fearing what will be done to him” if extradited to the U.S. He urged the court “not to trust [the] assurances” of the “same government” alleged to have plotted Assange’s killing.

The defense went even further to discredit the assurances made by the U.S. government, calling them “conditional” and “aspirational”. Fitzgerald said Australia had not yet agreed to take Assange in if he was convicted, and he predicted Assange would be put in solitary confinement “as soon as he arrives in America.”

What do Assange’s supporters say?

In a press briefing earlier this week, Moris told reporters that Assange was suffering physically and mentally as a result of the proceedings. “I saw Julian in Belmarsh prison. He was looking very unwell…I was quite taken aback by how thin he was.”

Assange’s supporters are keen to emphasize the significance of the case on global press freedoms. Addressing the Yahoo News investigation, Kristinn Hrafnsson, current editor-in-chief of WikiLeaks, compared the alleged CIA plot to the Saudi assassination of journalist Jamal Khashoggi. “The intentions are the same and the victims are the same: journalists.”

Moris argued that the Espionage Act should not be used against publishers of information in the public interest. “Julian is accused of receiving, possessing and publishing information to the public,” she said. “I asked you please to stop suggesting that Julian’s accused of espionage because it’s false. He’s accused of journalism.”

Read more: The Nobel Committee Sent a Message That Freedom of the Press Is Essential for Peace

However, a senior extradition practitioner who spoke to TIME on the condition of anonymity did not believe Assange’s actions could not be considered journalism. “Normally there is a crucial journalistic process of reviewing material and presenting it”, the source said. But in Assange’s case, “there was no filter, no analysis, just: publish”. WikiLeaks’ publication revealed sensitive technology-drive intelligence techniques and put human intelligence sources at risk, the person said.

Rebecca Vincent, director of International Campaigns for Reporters Without Borders (RSF), disagreed with this assessment when she spoke to TIME. In the evidentiary hearing in September, she said, the court “heard evidence of how Assange tried to slow the publication [of unredacted information by a German newspaper] and then he warned the U.S. government and urged them to take steps to protect anybody.”

International press freedom advocates, including RSF and Amnesty International, are defending Assange on the basis that he acted in the public interest.

“The publication of these leaked documents was an incredible contribution to journalism around the world”, Vincent told TIME. “We now know about war crimes, human rights violations and other abuses committed by states but none of the crimes that were exposed have ever been prosecuted. The only person being pursued here is the publisher.”

“Journalism is being criminalised even in our own democracies,” Vincent said. “This is a real tipping point for journalism around the world.”

It could take many weeks for the British High Court to come to a decision on this week’s appeal. Whichever side wins, Assange’s supporters expect the process will not simply end with the court’s ruling. “The process could be very fast,” Moris told reporters. “And it could also take years. Both prospects are terrifying”.