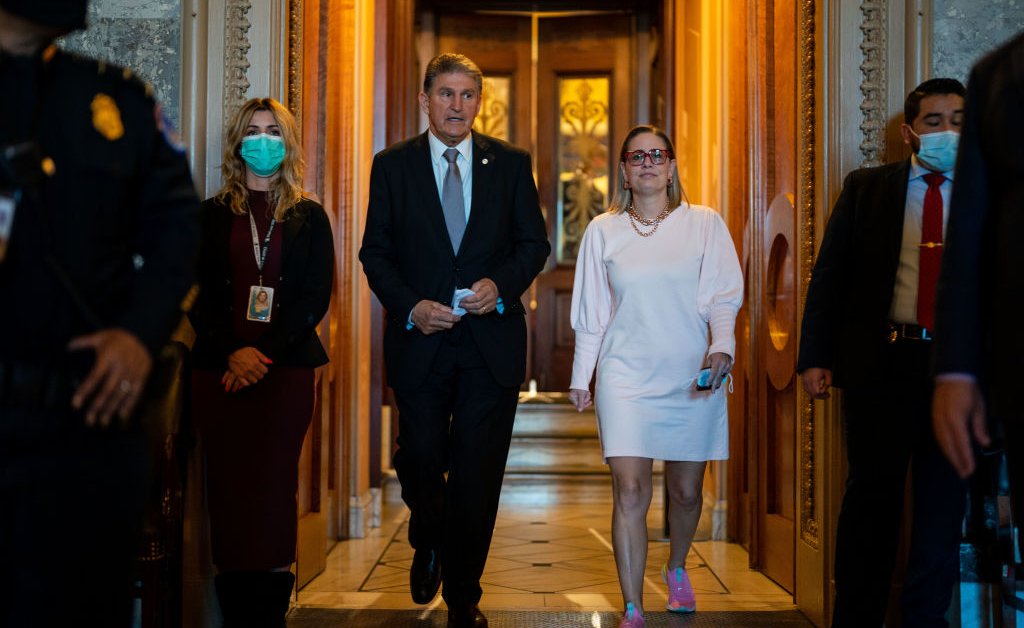 Buried in the graveyard of Democrats’ early hopes for the sweeping social and environmental spending bill that passed in the House of Representatives Friday morning is more than $1.5 trillion in spending that would have changed millions of Americans’ lives.

Over months of negotiations, numerous provisions were excised to make the legislation more palatable for the party’s two most centrist Senators: Joe Manchin of West Virginia and Kyrsten Sinema of Arizona, whose votes the bill depends on to become law.

Among the Democrats’ wishlist items that didn’t survive negotiations and the rule-making process were proposals to provide Americans with two years of free community college, expansions of Medicare to include dental and vision benefits, and a pathway towards citizenship for undocumented individuals. Plans for lowering prescription drug prices and providing U.S. workers with 12 weeks of paid medical and family leave were also considerably scaled back.
[time-brightcove not-tgx=”true”]

“I’m looking at the glass half full, actually three quarters full,” Congressman Sanford Bishop, a Georgia Democrat, told TIME in the Speaker’s Lobby Thursday night. “I’m not looking at what’s not in it. I’m looking at what is in it for the American people.”

But with the Build Back Better bill now on its way for another round of negotiations in the Senate, it’s still likely that the bill will be altered or whittled down further before it reaches President Joe Biden’s desk.

The Senate’s deliberations will once again revolve around Manchin and Sinema, who have already signaled they don’t support every item in the House’s bill. The Senate Parliamentarian will also issue her final determinations on which parts of the bill are eligible to be permitted to pass through reconciliation, which only requires a simple majority vote in the Senate rather than the two-thirds majority that non-budgetary bills require, but must meet strict requirements.

Here are four components of the House’s bill that are at risk in the Senate.

The White House and most Democratic lawmakers initially sought to create a paid leave policy offering 12 weeks of paid time off to full-time workers for the birth or adoption of a child, or qualifying medical events for oneself or a close relative. Despite nearly three-fourths of Americans supporting the provision, according to a recent CBS/YouGov poll, paid leave was initially cut from the $1.75 trillion Build Back Better framework that the White House released in late October after Manchin said he was opposed to passing paid leave in the bill.

In early November, however, House Speaker Nancy Pelosi announced a reversal: She said that a watered down version of paid leave—four weeks rather than 12—would be included in the House bill text despite Manchin’s opposition.

Manchin’s view hasn’t shifted. Though he has indicated support for the concept of paid leave, he does not think it should be enacted through reconciliation. “I just think it’s the wrong place to put it because it’s a social expansion,” he said after paid leave was added back to the House’s bill.

House Democrats know that paid leave is unlikely to survive in the Senate markup of Build Back Better, and have indicated they will work to pass paid leave outside of reconciliation if necessary, perhaps in a standalone bill. “This is something important. If it is not done now, it still needs to be done,” says Rep. Lisa Blunt Rochester, a Delaware Democrat. “I’m supportive of it, if it [happens] now or later, but not too much later.”

The House version of the bill significantly increases the cap on the amount of state and local taxes (SALT) individuals can deduct from their federal taxes, from $10,000 to $80,000. The increase in the maximum amount Americans can claim would provide the most benefit to wealthy homeowners in high-tax states like New Jersey, New York and California, who make enough money to have tax liabilities that high in the first place.

The changes to SALT would be one of the most expensive provisions in the bill, costing roughly $475 billion for the five years it would be in effect. Some progressives, like Vermont Independent Sen. Bernie Sanders, have expressed displeasure with the House’s proposal, which does not put an income cap on who can benefit from the higher SALT deduction limit. “I am open to a compromise approach which protects the middle class in high tax states,” Sanders said in a November statement. “I will not support more tax breaks for billionaires.”

Sanders and Democratic New Jersey Senator Bob Menendez suggest imposing an income limit, as high as $550,000, on who can benefit from a SALT deduction. Since all 50 Democrats need to be in agreement to pass the legislation, these two Senators alone could hold up the bill’s passage if their SALT concerns are not addressed. And they are not the only members of the caucus who are still mulling the provision. “I still have some concerns. There are a lot of people in Virginia who would benefit from SALT,” Sen. Mark Warner, a Virginia Democrat, said Thursday. “Some of these discussions are active and I’m waiting to see how they unwind.”

At least one component of the $550 billion Democrats have set aside for climate action appears at risk of being axed in the Senate: A provision that would provide people who purchase electric vehicles with a $7,500 fully deductible tax credit.

The credit can be claimed by car dealers on behalf of the person purchasing the car, which makes it so a car dealer could deduct the tax break from their original sticker price. The bigger issue is that Americans who purchase the vehicle from an American manufacturer with union represented workers would get an additional $4,500 worth of tax credits, providing a boon to companies like Ford and General Motors, who meet those criteria. But Toyota, which has a manufacturing presence in Manchin’s home state of West Virginia, could lose out because people who buy electric vehicles from the Japanese carmaker would only qualify for the $7,500 base credit.

“This can’t happen. It’s not who we are as a country. It’s not how we built this country, and the product should speak for itself,” Manchin said in November, according to Automotive News. “We shouldn’t use everyone’s tax dollars to pick winners and losers… Hopefully, we’ll get that… corrected.”

One-third of Americans believe that the nation should make it easier to immigrate here, which is the highest ever proportion to think so. But America has not enacted major immigration reform since 1986. Democrats sought to change that through reconciliation, in order to bypass the two-thirds majority support that other types of legislation need to get through the Senate.

The original idea was to create a pathway to legal status for the millions of undocumented immigrants living in the United States. Senate parliamentarian Elizabeth MacDonough, a non-elected official who determines what would sufficiently affect the budget to be included in a reconciliation bill, thwarted this attempt, assessing that such a provision would equate to a “tremendous and enduring policy change that dwarfs its budgetary impact.” Democrats’ Plan B, offering undocumented migrants who entered the country before 2010 a pathway to green cards, was also blocked by MacDonough.

Currently, the Build Back Better text offers a much narrower proposal to reform immigration: giving undocumented immigrants who entered the U.S. illegally before 2011 the ability to apply for renewable employment authorizations, protecting them from the risk of deportation for five-year stretches at a time. “This has been such a challenging journey this year, trying to get a pathway to citizenship into the reconciliation bill,” Rep. Veronica Escobar, a Texas Democrat, said at a Thursday press conference. “What we are left with, very likely, is work permits and protections. And I will tell you, while that is absolutely inadequate, we have to get that across the goal line.”

It’s not clear they will. While Sinema said she supports the current package’s immigration proposals, she also acknowledged there are “legal limitations to what can be done in a reconciliation package.” Manchin told Fox News in November that he generally did not support changes to immigration policy that were not accompanied by enhanced border security. “For us to even be talking about immigration without border security is ludicrous,” he said.

Even if Sinema and Manchin sign on, the fate of an estimated 7 million migrants who may qualify for parole under the policy could still be blocked by the Parliamentarian if she concludes the measure does not have a significant enough impact on the budget to be enacted through a simple majority vote.